Born as Mohandas Karamchand Gandhi on October 2, 1869. He is the hero of India‘s nationalism during the British-ruled India. Gandhi became famous by fighting for the civil rights of Muslim and Hindu Indians in South Africa, using the new techniques of non-violent civil disobedience that he developed.(Wikipedia)

A maintenance worker tosses a pail of water to clean a statue of Mahatma Gandhi installed outside the Gujarat state legislature in Gandhinagar, India, on October 1, 2012.

The philosophy of non violence as trancribed in Bhagavad-Gita wherein Mahatma Gandhi became interested in. 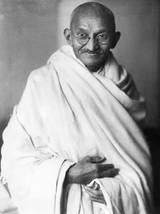